Bruce Darling, President/CEO of the Center for Disability Rights, is a publicly appointed member of New York State’s Most Integrated Setting Coordinating Council (MISCC). The Council is charged with advising the state on how to comply with the Olmstead decision and develop a plan to ensure that New Yorkers with Disabilities are able to live in the Most Integrated Setting. The Council is charged with making recommendations on both policy and funding.

Every member of the public who spoke during the comment period urged Governor Hochul and her administration to fully fund the New York State Fair Pay for Home Care Act to ensure that home care workers receive a minimum wage of $22.50 per hour. Mr. Darling who spoke on behalf of the Council’s Deinstitutionalization Committee made the following comments in support of Fair Pay for Home Care during the Council meeting. 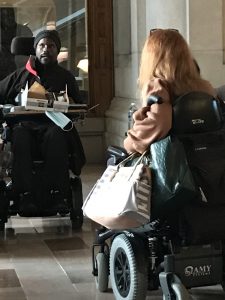 CDR’s Board Vice Chair, Kenyatta DaCosta, speaks with the NYS Chief Disability Officer in the War Room about the importance of Fair Pay for Home Care.

As public members, we have been appointed to the Council to advise the state on how to comply with the Olmstead decision and develop a plan to ensure that New Yorkers with Disabilities are able to live in the Most Integrated Setting which includes our own homes in the community with services and supports. The Council is charged with making recommendations on policy and funding. I appreciate that we are moving forward with the committees, and I am very happy to chair the Deinstitutionalization Committee. I want to thank the community members and state staff who have participated in those meetings – particularly the community members who are volunteering their time. I do my best to represent you.

The home care workforce crisis has been a significant issue discussed by Deinstitutionalization Committee members because the inability to secure workers is preventing people with disabilities from leaving nursing facilities. There is no question that the low wages paid to these workers has created this crisis. To put a finer point on it, in upstate NY, state law requires that fast food workers receive a minimum of $15 per hour while the state funds home care so that attendants only earn the basic minimum wage of $13.20.

The Executive Budget treated the home care funding to support the increased minimum wage as a raise. This isn’t welcome relief to home care workers, who are primarily women of color, it is an insult.

The Hochul administration needs to recognize that the low wages paid to this category of workers is the modern-day remnant of our nation’s shameful history of slavery and the abhorrent way we treat immigrants. This is not just rhetoric. The exclusion of home care workers from fair pay is a deliberate and racist injustice that was codified in national labor law. When the 1938 Fair Labor Standards Act was passed, guaranteeing minimum wages and standardizing hours, the statute was deliberately interpreted to exclude domestic workers as well as agricultural workers — many of whom were immigrants and African-Americans who would have performed these same functions while in bondage. More recently, a number of years ago, when I was researching the rates paid for home care services, I couldn’t understand why the rate’s direct care and training threshold was lower in NYC that other parts of the state even though the cost of living was (for me) mind-blowingly high. It was pointed out to me by a state worker that the rate structure deliberately suppressed the wages of workers in NYC because there was an abundance of immigrants willing to work for the low pay.

More directly specific to the charge of this council, I want to underscore how this is impacting Disabled New Yorkers:

• As part of the Open Doors Project, CDR is doing the transition work that our Center has done for over 20 years. The home care crisis has made it incredibly difficult to transition people back into the community. As we try to support older and Disabled folks in returning to the community – unless they have a family member or friend willing to work for the inordinately low wages – it can be almost impossible to make that happen. Some of these individuals may only need a few hours of support a day, and while they languish in these facilities and are denied their right to live in freedom, the state wastefully spends tax dollars to institutionalize them.

• Over the last month, one of the Disabled individuals CDR serves spent 14 days in the hospital – even though she wasn’t acutely ill. She is sent to the hospital as a “social admission” when she doesn’t have in home support. The only reason she was hospitalized – and the reason she remained hospitalized – was that the agency charged with providing her in-home support services didn’t have the staff.

• As individuals teeter on the edge of institutionalization, people sleep in their wheelchairs and lay in their bodily waste. These individuals are developing decubitus ulcers – where their flesh dies and rots – because they cannot get the attendant services they need. Some are institutionalized. Others die.

• Others – including one woman who came to Albany yesterday for the Fair Pay press conference – have had unnecessary surgery because they cannot get the attendants they need to assist with the toileting. This woman got a colostomy as the alternative to sitting in her own waste and risking health complications I have described above. Apparently, according to the surgeon, this is becoming a burgeoning part of their medical practice. To be clear, even if the state would rather pay for unnecessary surgeries, Disabled New Yorkers on Medicaid should not be forced to go under the knife and get colostomies because NYS won’t pay enough so they can get their attendants to assist them in the bathroom.

• Finally, I personally know individuals who are trapped in abusive situations because they cannot get anyone else to work for the low pay.

I am personally urging the Hochul administration to fully fund the New York State Fair Pay for Home Care Act and calling on you to ensure that home care workers receive a minimum wage of $22.50 per hour in the approved FY23 State Budget. Both the NYS Senate and NYS Assembly approved this historic wage increase in their budget resolutions. It is now up to the Hochul Administration to address New York’s homecare crisis.

After listening to individual speaking during the public comment period who described the impact that the low wages have had on people’s lives – putting their health, safety and freedom at significant risk – Mr. Darling urged the Hochul administration to consider how to consider how the public comments at the MISCC meeting and coverage of Fair Pay for Home Care during the budget cycle might be used as evidence that the state is violating people’s rights to live in the most integrated setting by preventing people from leaving institutions and putting people in the community at serious risk of institutionalization. He further suggested that because the Legislature had fully funded Fair Pay for Home Care in their budget bills, that the decision not to adequately fund attendant wages could be perceived as a self-imposed inability to comply with the Supreme Court’s decision instead of an undue hardship.